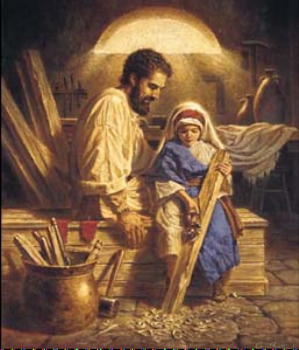 On the solemnity of the Immaculate Conception of the Blessed Virgin May December 8, 2020, Pope Francis issued an apostolic letter, Patris corde (“With a Father’s Heart”) for the 150th anniversary of the declaration of St. Joseph as patron of the universal Church.  To mark the occasion, the pope proclaimed a year dedicated to Mary’s husband, Joseph, foster father to Jesus.  The special “Year of St. Joseph” will be held through December 8, 2021.

In his apostolic letter, Pope Francis explains that the aim of this special year is “to increase our love for this great saint, to encourage us to implore his intercession and to imitate his virtues and his zeal,” describing St. Joseph as a “beloved father, a tender and loving father, an obedient father, an expecting father, a father who is creatively courageous, a working father, a father in the shadows.”

In its December 8th decree, the Apostolic Penitentiary said that, “to reaffirm the universality of St. Joseph’s patronage in the church,” it would grant a plenary indulgence to Catholics who recite any approved prayer or act of piety in honor of St. Joseph, especially on March 19, the saint’s solemnity and May 1, the Feast of St. Joseph the Worker.

What is a plenary indulgence? An indulgence is a way to reduce the amount of punishment one has to undergo for sins.  The recipient of an indulgence must perform an action to receive it.  This is most often the reciting of a specified prayer, but may also include the visiting of a particular place, or the performance of a specific good works.

Indulgences were introduced to allow for the remission of the severe penances of the early Church, and granted as an intercession of Christians awaiting martyrdom or at least imprisoned for their faith.

An indulgence does not forgive the guilt of sin.  The Catholic Church teaches that indulgences relieve only the temporal punishment resulting from the effect of sin (the effect of rejecting God the source of good), and that a person is still required to have his grave sins absolved through the sacrament of Confession.  An indulgence is not a permit to commit sin, a pardon of sin or future sin, nor a guarantee of salvation.

Conditions for a plenary indulgence is granted to those who will meditate for at least 30 minutes on the Lord’s Prayer, or take part in a Spiritual Retreat of at least one day that includes a meditation on St. Joseph.

The recitation of the Holy Rosary in families and among engaged couples is another way of obtaining indulgences, in order that “all Christian families may be stimulated to recreate the same atmosphere of intimate communion, love and prayer that was in the Holy Family.”

In addition to these, the Apostolic Penitentiary grants a plenary indulgence to the faithful who will recite any legitimately approved prayer or act of piety on honor of St. Joseph, especially on March 19, on May 1, the Feast of the Holy Family (which was January 31), on St. Joseph’s Sunday, on the 19th of each month and every Wednesday.

Hail Guardian of the redeemer,

Spouse of the Blessed Virgin May.

To you God entrusted his only Son,

In you Mary placed her trust.

With you Christ became a man.

Blessed Joseph, to us too,

Show yourself a father

And guide us in the path of life.

Obtain for us grace, mercy and courage.

And defend us from every evil.  Amen

Visit the Diocese of Grand Rapids website, www.grdiocese.org to learn more. Watch the bulletin for more announcements regarding the Year of St. Joseph.

The first appearance of Joseph is in the gospels of Matthew and Luke, from around 80-90 AD.  In Matthew, Joseph obeys the direction of an angel to wed Mary.  Following the birth of Jesus in Bethlehem, Joseph is told by an angel in a dream to take the family to Egypt to escape the massacre of children planned by Herod.  Once Herod has died, an angel tells Joseph to return, but to avoid Herod’s son so he takes Mary and the child to Nazareth and settles there.

In the Gospel of Luke, Joseph already lives in Nazareth, and Jesus is born in Bethlehem because Joseph and Mary travel there to be counted in a census.  Luke’s account makes no mention of him being visited by angels, the Massacre of Innocents or of a visit to Egypt.

The last time Joseph appears in any Gospel is in the story of the Passover visit to the temple in Jerusalem when Jesus was 12 years old, found only in Luke.  Christian tradition represents Mary as a widow during the adult ministry of her son.  Joseph is not mentioned as being present at the Wedding of Cana at the beginning of Jesus’ mission or at the Passion at the end.  If he had been present  at the Crucifixion, he would have been expected under Jewish tradition to take charge of Jesus’ body, but the role instead went to Joseph of Arimathea.  Nor would Jesus have entrusted his mother to the care of John the Apostle if her husband had still been alive.

In the Gospels, Joseph’s occupation is only mentioned once.  The Gospel of Matthew asks about Jesus:

“Is not this the carpenter’s son?”  The New Testament has no mention of Joseph’s death, but he is never mentioned after Jesus’ childhood, and Mary is always presented by herself, often dressed as a widow.

March 19, St. Joseph’s Day has been the principle feast day since the 10th century celebrated by Catholics, Anglicans, many Lutherans and other denominations.  In the Roman Catholic Church, the Feast of St. Joseph is a solemnity, and is transferred to another date if March 19 falls on a Sunday or during Holy Week.

In Sicily, where Saint Joseph is regarded by many as their patron saint, thanks are given to Saint Joseph for preventing a famine in Sicily during the Middle Ages.  According to legend, there was a severe drought at the time, and the people prayed for their patron saint to bring them rain.  The rain did come and the people prepared a large banquet for their patron saint.  The fava bean was the crop which saved the population from starvation, and is a traditional part of Saint Joseph day altars and traditions.  Upon a typical Saint Joseph altar, people place flowers, limes, candles, wine, fava beans, specially prepared cakes, breads cookies and other meatless dishes.  Foods are traditionally served containing bread crumbs to represent the sawdust since Saint Joseph was a carpenter.  Because the feast occurs during Lent, traditionally no meat was allowed at the celebration table.  The altar usually has three tiers, to represent the Trinity.

In 1870, Pope Pius IX declared Saint Joseph the patron of the Universal Church and instituted another feast, a solemnity to be held in his honor on Wednesday in the second week after Easter.  The 1870 feast was replaced in 1955 by Pope Pius  XII as the “Feast of Saint Joseph the Worker”, to be celebrated on May 1.

Saint Joseph is the patron saint of a number of cities, regions and countries, among them the Americas, Austria, Belgium, Canada, China, Croatia, Indonesia, Mexico, Korea, Peru the Philippines and Vietnam.  He is also the patron saint of families, fathers, pregnant woman, explorers, pilgrims, travelers, immigrants, house sellers and buyers, craftsmen, engineers and working people in general.